Sen. Kamala Harris dropped out of the Democratic presidential primary just a day ago, but members of her wealthy finance committee are already seeing outreach from allies of rival campaigns in an effort to recruit them to their cause.

Harris’ most affluent fundraisers, spanning from Wall Street to Silicon Valley, have been receiving calls and emails from people close to top-tier candidates like former Vice President Joe Biden, South Bend, Indiana, Mayor Pete Buttigieg, and Sens. Amy Klobuchar and Cory Booker. These people are hoping to snag the support of the bundlers and their donor networks.

While Harris, of California, cited a lack of “financial resources” in her dropout announcement Tuesday, her bundler list is among the most valuable in the 2020 field. She had more than 100 members on her fundraising committee spanning multiple industries.

“I’ve gotten calls from most of the campaigns asking me to sit down with the candidates so they can try to woo me,” said a New York-based financier who asked not to be identified. This person noted that he has heard from donors with allegiances to Biden, Klobuchar and Booker but has not made a decision on whom to back.

Separately, a Wall street private equity executive who supported Harris has been hearing from people close to Biden and Booker since Tuesday, asking for help. This person said that the approach has been “soft” and that these people have been asking to meet in order to get a feel for whether they can receive this person’s support. This person is leaning toward helping Biden but has not yet reached a decision. That will come, this person said, in January, the month before the first contests of the primary season.

A public relations executive who has offices in New York, Washington, D.C., Los Angeles and San Francisco said that there has been talk with Buttigieg’s donor circle for months. But, this Harris backer added, discussions with Biden’s team ramped up after the California senator dropped out, and that the former vice president will likely get access to this person’s donor network.

Many of these people spoke on the condition of anonymity due to the conversations being deemed private.

Representatives of Harris, Biden, Booker, Buttigieg and Klobuchar did not return a request for comment.

Bakari Sellers, a former South Carolina state lawmaker and a member of the Harris finance committee, said he has been called by allies of most of the higher-profile candidates running in the Democratic primary, except for Rep. Tulsi Gabbard and Sen. Elizabeth Warren.

He said he even heard from people close to Sen. Bernie Sanders, but not for the sake of fundraising. Sanders has sworn to focus solely on funding his campaign through grassroots donations. Instead, a potential endorsement from Sellers, who is black, could go a long way in trying to capture black votes in the early primary state of South Carolina. Biden, who leads national survey averages, has been leading in the polls with black voters, particularly in South Carolina. 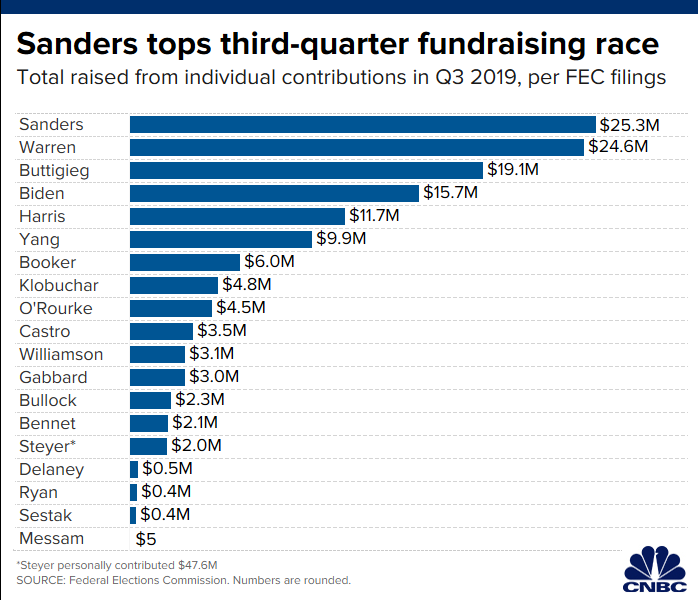 A recent Monmouth University poll showed Biden with 52% of the black vote in South Carolina. Sanders, meanwhile, had 25%.

Picking up members of Harris’ donor network would be a boon for the remaining candidates in the 2020 field.

Many of the contenders have been battling it out for fundraising supremacy in order to have enough resources to compete in the more delegate-rich primary states. That urgency to gobble up more donors will be even more prevalent in the months ahead since candidates Mike Bloomberg and Tom Steyer are billionaires and have extensive personal funds to compete in the race.

Funding for advertisements, field staff and overall campaign infrastructure is going to be key to success, particularly in Super Tuesday states like California and Texas. The contests are scheduled for March 3. Big victories that day could go a long way in helping propel a candidate to the nomination.

Biden has put enormous emphasis on Super Tuesday, while Bloomberg has already flooded the airwaves with TV ads in both of these states.

From finding a broad variety of good Ebooks to read, to writing some to be included in the ebooks library, TOP platform is a space that has a lot to offer both freelancers and clients with not only the library for ebooks, but with so much more.