Latest Articles
Home Elections Buttigieg, Biden lead the 2020 Democratic money race — see how the rest of the field stacks up Buttigieg, Biden lead the 2020 Democratic money race — see how the rest of the field stacks up

Pete Buttigieg and Joe Biden led the 2020 Democratic primary field in second quarter fundraising, while the leading candidates all entered July with a healthy store of cash, according to records filed late Monday.

The South Bend, Indiana, mayor hauled in $24.9 million from April through June, the best in the field of about two dozen candidates. The former vice president took in the second most with about $22 million, followed by Sens. Elizabeth Warren, D-Mass., and Bernie Sanders, I-Vt., with about $19.2 and $18 million in contributions, respectively.

For the fundraising totals, CNBC tracked individual contributions, a key way to gauge support for candidates. The exception is former Rep. John Delaney, the only candidate to self fund the vast majority of his campaign operation. 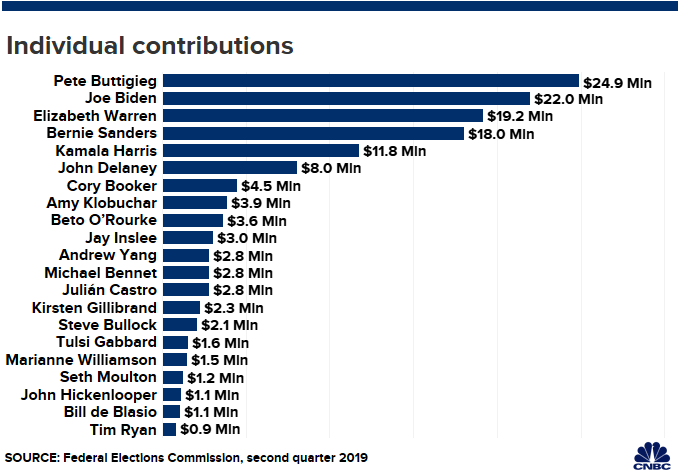 Meanwhile, Sanders entered July with a $27.3 million war chest, the biggest among Democratic candidates. Buttigieg had $22.7 million on hand, while Warren had $19.8 million.

The numbers give a glimpse into who has the resources to build out an infrastructure in key early nominating states — and who may struggle just to stay in the race in the coming months. The figures also offer clues about who may be able to keep up with President Donald Trump’s campaign, which has a head start on the fractured Democratic field and entered July with $56.7 million in the bank.

The candidates are jockeying for position ahead of the first primary nominating contests in February. Biden has led the vast majority of early national and state polls, typically followed by a combination of Sanders, Warren, Sen. Kamala Harris, D-Calif., and Buttigieg.

A handful of candidates burned through cash faster than they raised it in the second quarter. They include former Rep. Beto O’Rourke and Sens. Kirsten Gillibrand, D-N.Y., Cory Booker, D-N.J., and Amy Klobuchar, D-Minn.

TOP Helps You Earn Money As A Social Media Influencer From Home.

3 Reasons To Get TOP For Press Release Distribution Help.

Tips to help you choose the best digital marketing agency to boost your tourism sector.

The Role Of Social Media In Online Lobbying.

Ex-Cisco CEO says Facebook needs to ‘get ahead of regulators,’ faces a multiyear challenge.