The first Democratic presidential debate appears to have shaken up the 2020 race — at least for now. 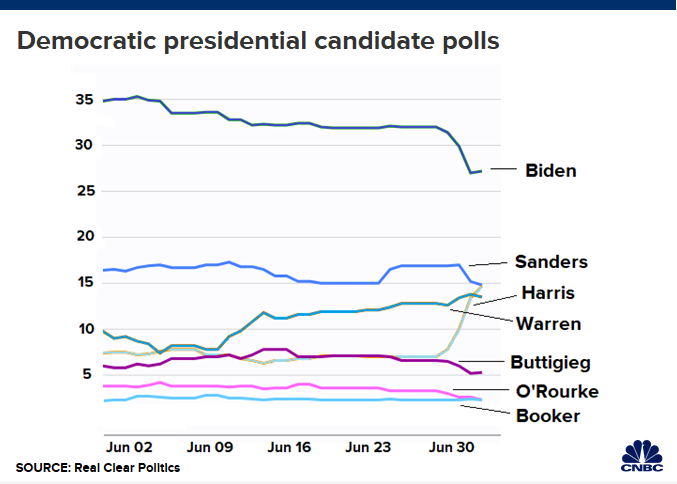 “Clearly, the debate had an impression on Democrats and Democratic leaners we surveyed. The big question is can Sen. Harris continue to build on this momentum,” said Mary Snow, polling analyst at the Quinnipiac University Poll. A Quinnipiac survey released Tuesday showed Biden with 22% of support — down from 30% the previous month — and Harris with 20% — up from 7% previously.

The polls show how debates can shift the foundations of a presidential race — particularly a crowded one where candidates only get a few chances to speak to a national audience. Harris has at least temporarily nudged her way to the front of the pack, in part by hitting Biden with a personal attack over his race record during Thursday night’s debate.

Meanwhile, the former vice president’s early grip on the race has loosened as voters become more familiar with their alternatives.

Of course, much can change between now and the Iowa caucuses, the first nominating contest that will take place in February. Any number of the two dozen candidates could experience a surge or slump after the five debates scheduled scheduled for later this year. The first of those will take place at the end of the month.

“This was post-debate and we have a long way to go,” Snow said. “It’s six months before any presidential nominating contests. So we always want to keep that perspective.”

Polls suggest Harris’ debate performance helped her standing in the race. Nearly half, or 47%, of Democratic or Democratic-leaning voters who said they watched most of the debate or paid attention to news stories about them said Harris did the best job, according to the Quinnipiac poll. Among respondents who said they watched the debate, 29% backed Harris, while 18% supported both Biden and Warren.

In a separate ABC News/Washington Post poll, 41% of Democrats and Democratic-leaning independents said Harris stood out in the debate. The survey found debate viewers felt better about supporting Harris. Only 5% of those who did not watch backed her for the nomination, while 20% who watched the senator in the debate supported her.

Biden still leads the field in just about every poll. He has one other factor going for him: voters view him as the best option to beat Trump.

In the Quinnipiac poll, 42% of respondents said he had the best chance of winning the 2020 election. The ABC News/Washington Post poll found 45% of respondents believe Biden is best equipped to beat Trump.

How Should Governments Go Seeking Out Investors For Foreign Direct Investment?.

3 Ways TOP Platform Can Help You With Online Lobbying.

2 Benefits To Getting Reviews Through TOP.

One Reason You Should Partner With TOP Today. To more >>> online translators platform.

3 Reasons Why You Should Trust TOP For Finding Translation Services.

The rise of superbugs: Facing the antibiotic resistance crisis.

5 Tips to Keep Your Nails Strong.