European leaders are meeting on Thursday to decide whether to grant the U.K. an extension to its Brexit due on March 29.

U.K. Prime Minister Theresa May is in Brussels Thursday to seek support from the bloc’s 27 leaders for an extension to Brexit date that would mean a departure takes place on June 30th.

The move comes after U.K. lawmakers rejected May’s Brexit deal with the EU for a second time earlier this month but also rejected the idea of leaving the bloc without a deal.

May requested the extension on Wednesday in a letter to the EU and said she intended to try to put the Brexit deal before Parliament a third time next week. Whether she can do so or not is another matter, as House Speaker John Bercow said the deal would have to have changed significantly in order to justify putting it before MPs a third time.

Meanwhile at the European Council summit on Thursday, EU leaders will have to agree unanimously to a delay. If they don’t, the U.K. could exit the bloc abruptly on March 29 with no deal – in other words, the infamous “cliff-edge” scenario where no agreements are in place related to Britain and the EU’s future relationship.

On Wednesday, European Council President Donald Tusk signaled a willingness to grant an extension, only if the U.K. Parliament backs May’s deal (formally as the “withdrawal agreement’). He also said that “the question remains open as to the duration of such an extension.”

France, on the other hand, has indicated that it has no appetite to give the U.K. more time, especially after two years of negotiations. Germany appears more pragmatic, however, with Chancellor Angela Merkel telling the Bundestag Thursday that Germany was ready to back a short extension and that she will “fight to the last minute to avoid a no-deal Brexit.”

European Parliamentary elections between 23-26 May are also at the forefront of EU leaders’ concerns and there is little desire to grant the U.K. more time if it could disrupt, distract from or compromise those polls.

Ahead of her visit to Brussels, May made a speech on Wednesday in which she blamed British lawmakers for frustrating the Brexit process. Addressing the British public she said she recognized weariness with ongoing Brexit uncertainty and infighting and added, “I am on your side.” Opposition Labour party leader Jeremy Corbyn is also in Brussels and is due to meet the EU’s chief Brexit negotiator Michel Barnier.

“The prime minister has asked to extend for a couple of weeks … but one thing is clear, she will only get the extension if she delivers a credible and convincing explanation.” He said it was possible the U.K. would have to leave the bloc on May 22, before the EU parliamentary elections, a view shared by Holger Schmieding, chief economist at Berenberg Bank. 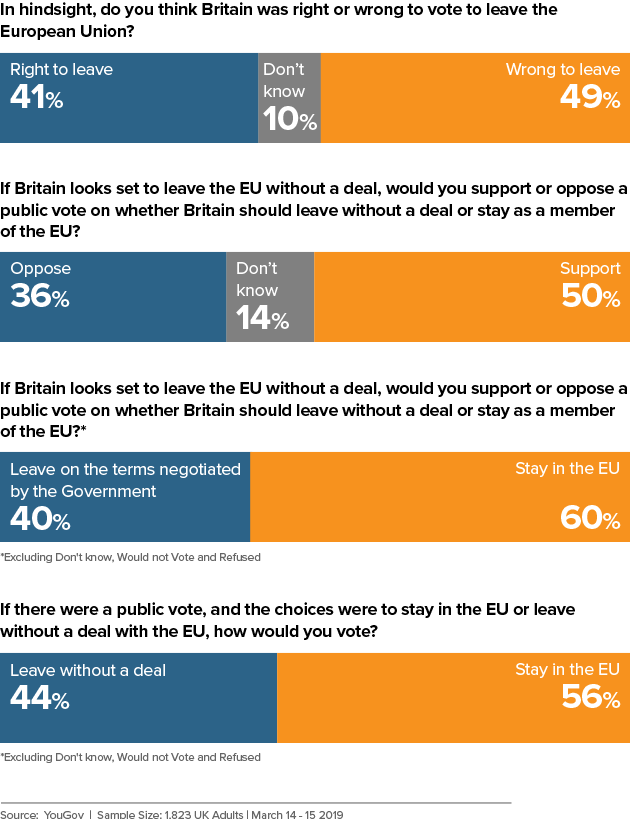 The economist noted Thursday that if the U.K. has still not clarified its intentions by the end of next week (whether another parliamentary vote on May’s Brexit deal is held or note), the EU might budge on granting more time.

“We would still expect the EU27 to grudgingly grant a Brexit delay at a special summit which would then have to be called for that purpose at the end of next week.”

“But the EU27 would then probably suggest a longer delay so that the U.K. has time to fundamentally re-think its Brexit approach – or perhaps Brexit itself – in a new “political process”. The risk of a political accident resulting in a hard Brexit on 29 March 2019 is not yet very high, but it is not negligible either. We put the overall risk for a hard Brexit at 15 percent,” he said.