Trump attacks the late Sen. John McCain over his involvement in the Russia investigation

President Donald Trump attacked the late Sen. John McCain in a series of weekend tweets over his role in a dossier that contains unverified claims about the president’s ties to Russia.

The president’s comments sparked wide backlash both from McCain’s family and Republicans who worked with the former Arizona lawmaker. Trump has long railed against the 2008 GOP presidential nominee and Vietnam prisoner of war, even after his death in August.

The criticism started Saturday, when Trump reacted to court documents unsealed last week that shed light on the role of a McCain associate in spreading the dossier. The president has repeatedly slammed the report and wrongly claimed that it directly led to the investigation into Russian efforts to influence the 2016 election and whether the Trump campaign colluded with Moscow.

In his Saturday tweet, Trump accused the late senator of spreading the memos, written in 2016 by former British intelligence agent Christopher Steele. McCain turned the dossier over to the FBI after the 2016 election for the bureau to look into the allegations more fully, The New York Times reported in 2017. While some of the dossier’s most explosive claims are still unverified, other pieces of it have proven true.

“He had far worse ‘stains’ than this, including thumbs down on repeal and replace after years of campaigning to repeal and replace!” Trump added, referencing the senator’s 2017 vote that helped to sink a Republican plan to repeal the Affordable Care Act.

Starr indeed called the dossier “a very dark stain” on the longtime senator during a Saturday interview on Fox News. However, he added that McCain is a “great man” and “American hero.”

In a subsequent tweet Sunday, Trump called McCain “last in his class” at the U.S. Naval Academy in Annapolis. He claimed that the late senator and Democrats “working together, failed (as usual).”

In a tweet Saturday, she also said that “no one will every love you the way they loved my father.” McCain wrote that the president should “spend more time” with his family instead of “obsessing over mine” on Twitter.

Meghan McCain, a host on the TV show “The View,” has repeatedly criticized the president for his comments about her father.

Trump responded to Meghan McCain by sharing a message from a Twitter user identified as Lori Hendry.

“Millions of Americans truly LOVE President Trump, not McCain. I’m one! We hated McCain for his ties to the Russian dossier & his vote against repealing Obamacare,” the tweet read in part. 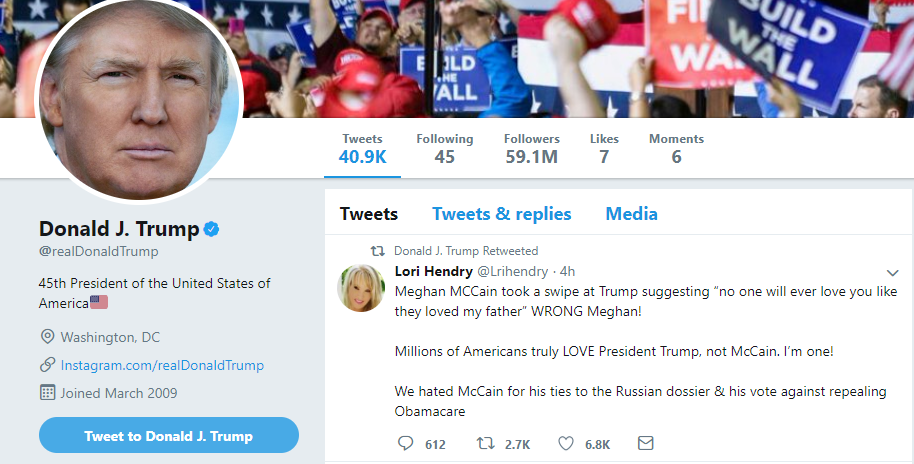 Sen. Lindsey Graham, a South Carolina Republican and good friend of McCain’s, stood up for the late lawmaker Sunday without mentioning Trump. Graham is also close to the president.

“As to @SenJohnMcCain and his devotion to his country: He stepped forward to risk his life for his country, served honorably under difficult circumstances, and was one of the most consequential senators in the history of the body,” Graham wrote in a tweet.

“Nothing about his service will ever be changed or diminished,” he added in a second message.

Larry Sabato, a widely followed political prognosticator and director of the University of Virginia Center for Politics, said Trump’s comments are “the latest manifestation of Trump’s incurable sickness — the inability to let anything go, the instinct not just to defeat but to destroy any opponent, a debilitating jealousy that continues beyond the grave.”

In a book published last year, “The Restless Wave,” McCain explained his involvement in handing over the dossier to ex-FBI Director James Comey.

“I reviewed its contents. The allegations were disturbing, but I had no idea which if any were true. I could not independently verify any of it, and so I did what any American who cares about our nation’s security should have done,” McCain wrote.