Trump loses support among his core voting groups as the shutdown drags on, polls say

President Donald Trump is hemorrhaging support amid a political standoff over his proposed border wall that has resulted in the longest government shutdown on record, according to polls.

As the shutdown of about a quarter of the federal government lumbers toward its fifth week, the president even appears to be losing favor with his core constituents, whose support for Trump until this point has been rock-solid since the 2016 campaign. 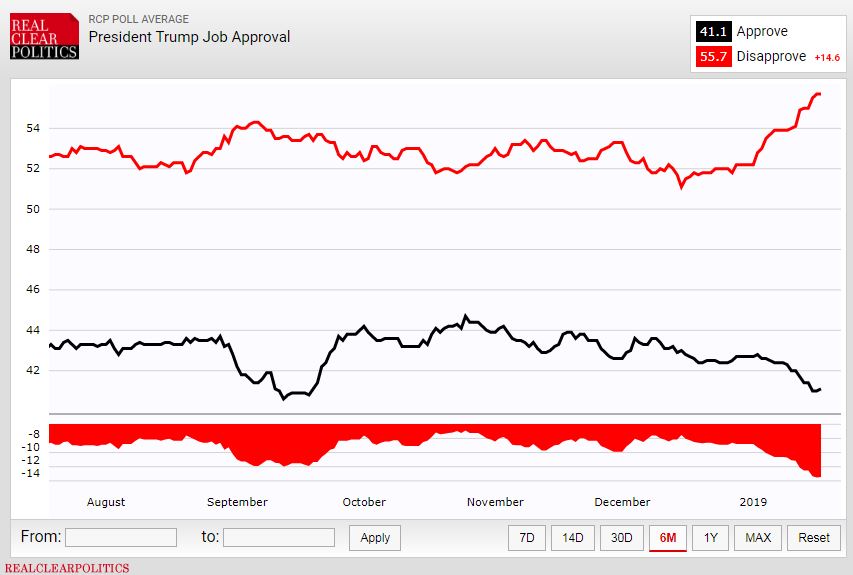 An NPR/PBS NewsHour/Marist poll published Thursday found that Trump’s approval rating has slipped 3 percent from last month to 39 percent, while his disapproval has climbed 4 percentage points to 53 percent.

And unlike in past political fights, the poll and other recent surveys indicate that some of the groups thought to comprise key parts of Trump’s base are not immune from the broader downward trend.

Watch the evolution of President Trump’s stance on how Mexico will pay for the border wall   22 Hours Ago | 04:02

White evangelicals’ support for Trump, for instance, plunged a net 13 percentage points in the NPR poll, sinking to 66-23 percent approval from 73-17 percent in the December poll. Trump also lost support from noncollege-educated white men, with his approval falling to 50 percent from 56 percent and his disapproval ticking up 1 point to 35 percent.

Cracks even appeared in Trump’s seemingly impenetrable facade of overall Republican support: 83 percent of Republican respondents said they support the president in the most recent poll — down 7 points from the early December poll — while his disapproval in the party rose 3 points.

Those results match other recent polling on the president’s approval. A CNN/SSRS poll published Sunday found Trump’s approval among white men without college degrees at 45 percent, which CNN says is the lowest-ever level of support for him from that group in its surveys. Political data site FiveThirtyEight’s aggregated presidential popularity tracker shows Trump’s approval gap, which has been underwater for most of his presidency, widening markedly since mid-December.

Even Rasmussen Reports’ measure of Trump’s overall approval, a number that has generally skewed more favorably toward the president, has slid 7 percentage points to 43 percent from a Dec. 5 high. Trump has taken to Twitter to tout Rasmussen polls that have shown him at 50 percent approval.

Trump has long touted the loyalty of his base, once telling supporters during the campaign that “I could stand in the middle of 5th Avenue and shoot somebody and I wouldn’t lose voters.”

But after publicly telling Senate Minority Leader Chuck Schumer that he would be “proud” to shut down the government in pursuit of funds to construct his long-promised wall along the U.S.-Mexico border, Trump has evidently had trouble selling his subsequent message that Democrats are responsible for the continued negotiating stalemate.

Trump is demanding that any deal to fund the nine federal agencies affected by the shutdown include $5.7 billion for his border wall — a requirement Democratic leaders including Schumer and House Speaker Nancy Pelosi are rejecting outright.

The president also appears to have backed off a prior threat to declare a national emergency as a way of bypassing the gridlock with Congress. That proposal received mixed reviews even among Republicans who support the wall.

Still, some Republicans don’t want Trump to give up his “leverage” by accepting Democrats’ recent proposal to reopen the government and continue border security negotiations separately.

The White House did not respond to CNBC’s request for comment on the recent polling data.

The poll results also come as Democratic lawmakers come out of the woodwork to announce their 2020 bids to challenge Trump.

Their announcements follow Sen. Elizabeth Warren, D-Mass., who launched an exploratory committee in December, and former Maryland Rep. John Delaney, who declared his candidacy in 2017.