Billionaire Democrat Tom Steyer, who has pushed for Trump’s impeachment, won’t run for president in 2020

Democrat Tom Steyer, a billionaire who has been pushing Congress to impeach President Donald Trump, will not run for president in the 2020 campaign.

CNBC confirmed with a Steyer representative that he wouldn’t run after The New York Times first reported the development. The Times obtained prepared remarks from a speech Steyer was scheduled to give late Wednesday afternoon.

Steyer’s decision came as other potential Democratic candidates considered whether to run. A flood of announcements is expected in the coming weeks.

Sen. Elizabeth Warren, D-Mass., has already announced that she formed an exploratory committee, which is a big step toward declaring a full candidacy. Other top Democrats, such as former Vice President Joe Biden, and Sen. Bernie Sanders, I-Vt., are also considering whether to run in what could be a large field. The first contests of the presidential primary season start a year from now.

Steyer, of California, was one of the top donors during the 2018 congressional midterm elections. 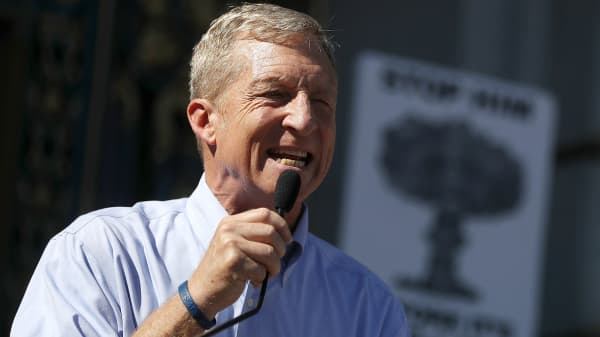 Before the midterms, Steyer became one of the most vocal advocates for impeaching Trump through his organization Need to Impeach and it appears he’s going to be continuing that rallying cry throughout the next year.

The billionaire’s chief strategist, Kevin Mack, announced Wednesday that Steyer will be committing $40 million to the impeachment effort which will include a public education initiative, town halls across the country, a summit in Washington, D.C., and mobilizing millions of supporters to continue pushing their representatives to back impeachment.

Part of the 2019 campaign will also include a new television ad series, which, Mack says, is “aimed at building public and congressional support for impeachment.” Their efforts will be focused on the districts of Reps. Adam Schiff, Maxine Waters, Richard Neal, Jerrold Nadler and Elijah Cummings, who lead key committees of oversight and investigations while also being in states with Republican senators up for re-election in 2020.

The group’s petition that calls for Congress to force Trump out of office has garnered more than 6 million signatures. During the elections, they created dozens of online political ads encouraging voters to turn on Republicans and back Democrats instead.

After Democrats reclaimed the House, Steyer hosted a series of town halls to promote his platform, the “5 Rights,” which resemble a presidential campaign platform.

In states such as the early primary battleground of South Carolina, Steyer called on Democrats to champion “the right to an equal vote in a fair democracy, the right to clean air and clean water, the right to learn, from pre-K through college and advanced skills training, the right to earn a living wage, and the right to health,” according to a press release.